This past Christmas, Joy and I went to Spain and saw lots of cool sights and ate lots of great food...Now, taking pictures is cool (I took about a thousand) but it was even cooler when I got the chance to sit down, take in the sights and sketch! Bringing a sketchbook and creating a travel journal was one of the best things I did on this trip and next time I go, I'm definitely doing it again.
This first one highlights just some of the AMAZING food we had in Cordoba when we visited La Mezquita. It was an old mosque that was converted into a cathedral. 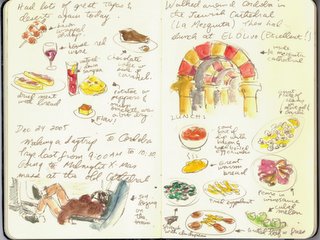 This next one is of the Alhambra in Granada. It used to be a Muslim stronghold that was conquered by the Spanish. I think the painting could've been a little less overworked but I was FREEZING cold at the time. 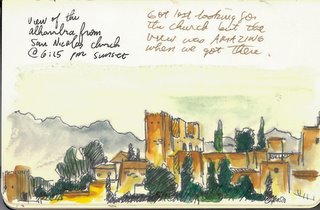 I'll also try to post some of my actual pics from my digital camera sometime...until then, enjoy!
Posted by chris chua at 12:08 PM

nice sketches, chris. it's amazing after seeing how much you guys ate, that you actually look like you lost weight on your trip. it must have been all that walking. the alhambra sketch is sweet.

u should've traded your sketches for a free meal. dope sketches/paintings man. i always remember things better with a sketch as opposed to taking a photograph. anyways, i sent u an email... peace brotha.

andrea- yes, Granada is one of the most beautiful sights in Spain! I loved it.

Willy-I actually took a really HUGE dump before I came back home! That would explain the weight loss.

wattana-thanks for the favor, man!

Hey Chris, thanks for the comment on my blog. Great sketches, funny, I've been to Granada too last November, did you see the sketches on my blog? I've been to Seville too, but Granada was so much nicer! We almost could have bumped into each other sketching!

Just passing through, I'm digging the blog by the way.

Hallo I absolutely adore your site. You have beautiful graphics I have ever seen.
»

Thanks for the info. Visit us at Travel Tips

Looking for information and found it at this great site... » »


Guatemala City is blessed with many attributes that are just ripe for exploration by the seasoned tourist. There are the Mayan ruins that have been a focal point for the industry as well as the volcanoes that are said to be steaming. The jungle provision within the area is almost as rich as anything that would be found in the Savannah. The beaches that are available for the tourist are rather quiet and this suits many people that are just fed up with the city life. The Mayans were a historical tribe that lived in this part of the world 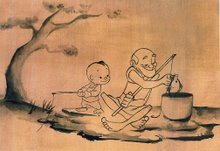